Gail found quail eggs from young, local, quail-raising entrepreneur. We are never ones to pass up a cool new thing. This morning, we turned them into three separate dishes. You see, with quail eggs, you can have three breakfasts without guilt. 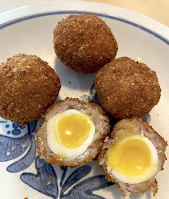 First up was Scotch eggs. The quail eggs were the perfect size for a Scotch egg. A regular sized Scotch egg is frankly daunting, not that I wouldn't eat two if you sat them in front of me, but these dainty things were much more sane. We started by par-boiling the eggs for 3 minutes. Peeling the little things was a pain. While the half-hard eggs were firm enough to handle--regular eggs would be a mess after just 3 minutes--the shells were harder and broke into tiny bits that were difficult to remove. We covered them in a maple breakfast sausage, which, while delicious, overpowered the flavor of the eggs, so we couldn't reasonably tell the taste. The presentation was dramatic enough, but I can't imagine peeling enough of the little guys to make a reasonable meal.

Next up, we made two fried eggs. We did them in olive oil thinking that butter might overwhelm the flavor of the eggs. We served them over a single piece of toast cut up to fit them. Boy, these were good; richer and more flavorful than a chicken egg. They were easily worth the effort of this simple preparation. Oh, and so cute. 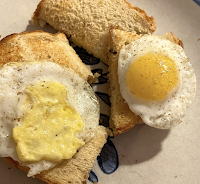 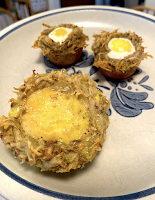 Finally, we made shredded potato bird nests. You can see in the picture that we used mini-cupcake tins for the quail egg nests and regular cupcake tins for a chicken egg comparison. (So, you might say we had four breakfasts this morning, but who's counting.) What you probably can't tell from the picture is that we shredded the quail egg nests using the fine shredder. We wouldn't bother with this in the future, it made no difference to the final texture or taste. These were also quite good, and indeed, tasted better than the chicken egg versions.

Next stop, the emu egg.

This work is licensed under a Creative Commons Attribution-Noncommercial 3.0 License.